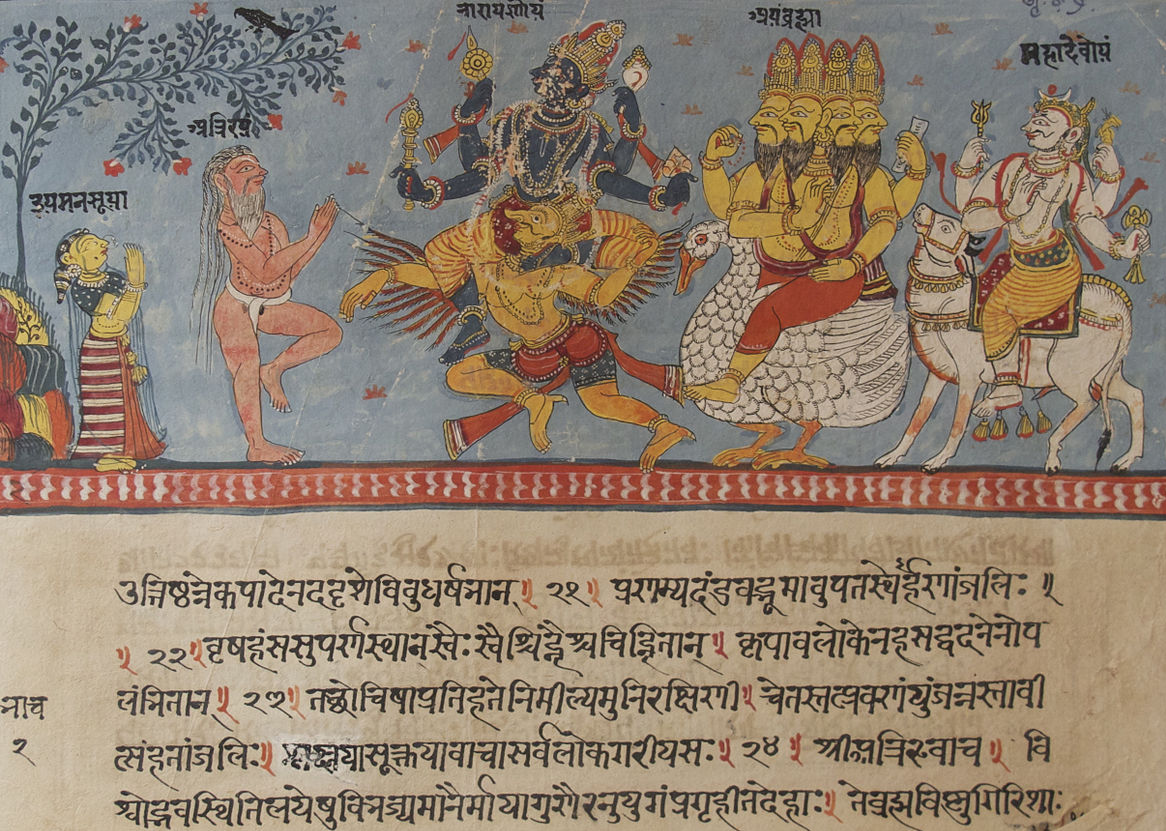 The elementary course presents the basic grammar of this rich and challenging language over the course of two terms.  From the very first day, students will begin reading texts, and using simple spoken Sanskrit.  We also look at the role of Sanskrit in religious history and in Indian and Nepali society up to the present.

There are no formal prerequisites, although prior study of another language is very helpful.  Meeting times are arranged.  Completion of SKT 202 fulfills the FL (foreign language) requirement

The sequence SKT 101, 102, 201, 202, 301 provides all levels of study; normally only one level is taught at a time.  Between 1999 and 2015, all levels were taught under the rubric REL 299.  In 2013, the intermediate-level class performed a staged dramatic reading of the Matta-vilāsa-prahasanam (“Drunken Revelry, a Farce – or, A Priest, a Monk, and Yogi Walked into a Bar…”) by Mahendravikramavarman (early seventh century).  The play is a satire of sectarian rivalries between Kapalikas, Buddhists, and Pashupatas, religious groups in classical south India.

A video of the performance is available here:

The course begins with:
देववाणिप्रवेशिका: Devavāṇipraveśikā: An Introduction to the Sanskrit Language, by Robert Goldman and Sally Sutherland
A Sanskrit Grammar for Students, by A. A. Macdonell (1927 ed. or later)
and continues with:
A Sanskrit Reader, by Charles Rockwell Lanman (Indian edition | pdf)
Sanskrit Grammar, by William Dwight Whitney (Indian edition | pdf)
An Early Upaniṣadic Reader, by Hans Hock
Scholastic Sanskrit, by Gary Tubb and Emery Boose

A Note on the History of Sanskrit at Washington and Lee:

Although instruction in Sanskrit was not part of the curriculum at Washington and Lee University until Prof. Lubin first taught it here in Winter Term, 1999, he is not the first Sanskritist on the faculty.

A century earlier, from 1893 to 1899, Edwin Whitfield Fay, a student of Maurice Bloomfield’s at Johns Hopkins University and author of The Treatment of Rig-Veda Mantras in the Grhya Sutras (1899), taught here as professor of Latin before moving to a post at the University of Texas, Austin.  Fay ensured that the W&L library acquired a number of works on Sanskrit and Indic philology, including a copy of his mentor’s now rare 1901 facsimile edition of the unique Sharada manuscript of the Paippalada version of the Atharva-Veda, The Kashmirian Atharva-veda (school of the Paippaladas).  By a happy coincidence, my own work partly follows in the footsteps of Fay’s 1899 book.

One source suggests that Sanskrit may have been taught outside of the official curriculum even earlier.  The Rev. George Junkin (1790–1868), president (1848–1861) of Washington College, as it was then called, is reported to have given private lessons in Sanskrit in the evenings, as recounted in HERE.  For more information on Junkin, see: http://www.frontierfamilies.net/family/junkin/family/C7GJ.htm or  http://www.geneabios.com/lafayette/junking.htm or http://www.lib.muohio.edu/my/miamiyearsVI.html and The Reverend George Junkin, D.D., LL.D.: A Historical Biography (1871)